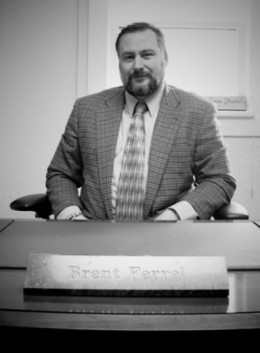 Brent M. Ferrel, Esq., is a native New Mexican, born in Las Cruces New Mexico. He currently resides in Los Lunas, New Mexico with his wife and two sons. Mr. Ferrel spent his childhood in Albuquerque. After graduating from Valley High School in 1998, he enlisted in the United States Army and became a paratrooper. A year after arriving in his regular unit, Brent was one of five men in his battalion to earn the coveted Expert Infantryman’s Badge; a symbol of tactical and technical proficiency.

It was with the 82nd Airborne Division that Mr. Ferrel served in Kosovo as a radiotelephone operator on a scout sniper team. Following his service with the Army, Brent enrolled at Campbell University and enlisted in the North Carolina Army National Guard. After completing his first semester of college, he was deployed to Afghanistan.