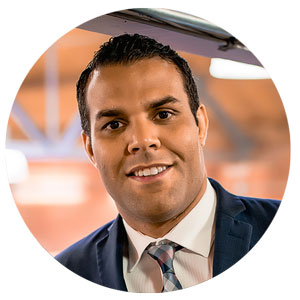 Edward Lomena, who grew up in New York City, decided to become a lawyer after he had a bad experience of his own with an attorney. He was young when a family friend referred him to a lawyer who seemed to want to help. “It turned out they didn’t, and I could never get in touch with them,” he said. “It was a difficult process and it ended up hurting me. I realized I could do a better job than that.” He pursued a career in the law, vowing to do good work for his clients.

He thought he would go into corporate law but fell in love with trial law. The judges at one of his trial law competitions in school asked him to join their new firm when he graduated. It happened to be a personal injury firm and Edward has been practicing personal injury law ever since.

Edward, who has been in Colorado for two years, chose the McDivitt Law Firm because he appreciates the respect the firm has for its clients. “More than any other firm I’ve worked at, McDivitt really cares about their clients,” he said. The goal with every case is to make the client feel well served and to feel they can recommend McDivitt to their loved ones with confidence the attorneys will help.

“Excellent law firm who is on the top of their game!! Communication about my case step by step was superb. Madelayne and Edward are fantastic! I would recommend this law firm to anyone with a car accident. They’ve done their job very professionally. You won’t be sorry giving a call to McDivitt Law Firm.” D.H., Colorado Springs, CO