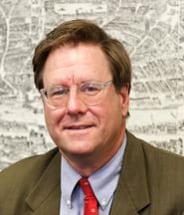 I was born in Ithaca, New York. I received an undergraduate degree from Dartmouth College and a law degree from Cleveland-Marshall School of Law. I was an Assistant District Attorney in Tompkins County. I served as a member of the House of Delegates for the New York State Bar Association from 1992-1995. I was a member of the Appellate Division, Third Department Committee on Professional Standards (Attorney Grievance Committee) from 2005 until 2010. I was chairman of the same committee from 2010-2011. I have served on the boards of Tompkins County Mental Health Association, the Ithaca Youth Hockey Association, and the board of the Lansing Community Recreation Center.

I am a trial attorney practicing in the following areas: personal injury, fire loss, construction, criminal and surrogate.

I live in Ithaca with my wife, four children and a menagerie of pets.

85% of Practice Devoted to Litigation