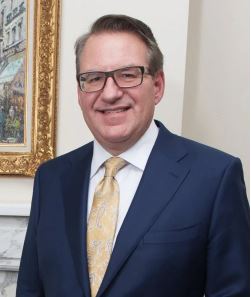 Kurt D. Lloyd is a jury trial lawyer based in Chicago who represents victims of personal injury or wrongful death. He is smart, tough, and never gives up on his client's case.

Kurt works tirelessly to protect and advance his clients right to a trial by jury.

With over 30 years of experience and 70 plus jury trials, he has won more than $355 million in jury verdicts and settlements from insurance companies and corporations to help his injured clients recover.

Kurt was born and raised in the Chicago land area. He was the first and only member of his family to go to college. Kurt's father never finished high school and always worked two jobs until his death. At his funeral, Kurt said: "his father's work ethic gave him the drive to succeed as a trial lawyer."

Kurt is the founder of the Lloyd Law Group, Ltd., a plaintiff's personal injury and wrongful death law firm. Kurt believes that every client's case should be worked up as if the case will go to trial. By preparing every case for trial, the value of each client's case is maximized.

Kurt has been nationally recognized as a jury trial lawyer by the American Association for Justice, which awarded him the Citation of Excellence medal. After prosecuting 50 civil jury trials, the prestigious American Board of Trial Advocates invited Kurt to become a member.

Kurt recently wrote the book On Jury Selection for Illinois lawyers. Kurt often says: “If you don't pick the right jury, you'll lose your case before you start.” He wrote the book to help young trial lawyers representing injured clients understand how to select a jury in Illinois courts. On his blog JurorDeseletion.com, Kurt also posts about the jury selection process, which he believes is really about the art of juror deselection. His Blog is followed by hundreds of Illinois lawyers.

In his medical malpractice cases, Kurt is driven to maintain and promote patient safety. He has won by jury trial or settled exceptional cases which resulted in patient safety improvements.

$9.7 million verdict for a brain-damaged child against an HMO physician which prompted changes in gatekeeper management of obstetric patients.

$8.0 settlement in a chemotherapy overdose case against University of Chicago Hospitals which resulted in new safety double check procedures by nursing staff.

$14.0 settlement for a brain-damaged child against Northwestern Memorial Hospital which changed methods for monitoring mother and baby heart rates during labor.

Kurt has earned a reputation for rescuing many catastrophic injuries and wrongful death cases for clients after other lawyers, thinking that there was no case, dismissed or abandoned the client's case. For example:

$2.0 settlement for a man who had undergone neurosurgery and suffered a stroke and the original lawyers dismissed the case. Kurt re-filed the lawsuit after finding and hiring a leading Harvard neurosurgeon who testified that the defendant surgeon used the wrong technique causing the stroke.

$8.0 settlement for the family of a young woman who died after living in a coma for 9 years. After numerous medical experts could not determine the cause of the woman's cardiac arrest, her lawyers dismissed the case. Kurt re-filed the case after consulting a vascular surgeon who invented a blood clot detection test and proving the defendant surgeons had misread the test results, and that the woman had actually experienced a pulmonary embolus which caused her heart to stop.

Kurt lives in the city of Chicago with his family and his Labrador retrievers.

"Kurt Lloyd was an incredible lawyer and asset to have in our corner. I'm not a litigious person, however after my mother died due to malpractice, Kurt Lloyd helped get us through a difficult time. He is compassionate and empathetic. He took charge, and we were able to grieve. He explained the le...

"I had a wonderful experience with Lloyd law office. After an automobile accident left me facing high medical bills, I couldn't afford and the threat of being turned into collections I turned to Lloyd law. Matt Lloyd and staff provided exceptional legal counseling every step of the way."

"My wife and I used Kurt Lloyd for a personal injury case that settled in 2009. We feel that if we had not had Kurt on our side, we would have been in some serious trouble. My wife had been hit by an underinsured driver while walking across the street, therefore leaving us with some substantial m...

“Kurt was able to expedite a settlement in a timeframe quicker than I thought was possible. Another pleasant surprise was the amount”.

“A big "thank you" to Attorney Kurt Lloyd for bringing my case to a successful close. I was hit by a car as a pedestrian, and the driver was the employee of a large corporation. Kurt Lloyd was determined in tracking down the evidence that identified the hit/run driver, in pressing the driver's co...

“Attorney Lloyd handled a medical malpractice claim for my family. I was impressed with his ability and patience answering all questions regarding the matter. As an attorney, I appreciated his approach to the claim. His preparation for depositions and there were many, was exemplary. My family and...

"Attorney Lloyd handled a medical malpractice claim for my family. I was impressed with his ability and patience answering all questions regarding the matter. As an attorney, I appreciated his approach to the claim. His preparation for depositions and there were many, was exemplary. My family and...

I was injured on the job using equipment that had a manufacturer safety issue. I had spoken with several local attorneys in my area that told me I had no chance of winning before even hearing the details and facts regarding my injury. I heard about Kurt Lloyd from an acquaintance and decided to ...

Attorney Kurt Lloyd helped my son Emilio win a great settlement. Emilio was born with shoulder dystocia and suffered a brachial plexus injury. Erb's Palsy. Mr. Lloyd took my son's case and stuck with it when many doctors said there was not any malpractice. He won Emilio over 1 million dollars.