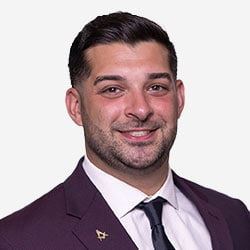 Matthew M. Foti is the principal attorney at Foti Law. Attorney Foti is a civil and criminal litigator who focuses his practice on personal injury. Matt has recovered millions of dollars for people injured in cases ranging from simple negligence to the most sophisticated and complex liability cases. Matt grew up in Malden and attending Malden Catholic (class of 2007). While living in Malden he played many sports including football, baseball, and lacrosse.

Matt is available 24 hours a day for his clients. He started his firm with the core principle of treating all clients as if they were family members. Every case and every client are treated with the outmost care and respect.

Away from the office, Matt spends time with his wife and daughter. He is a die-hard Boston sports fan who prides himself on his knowledge of fantasy football.