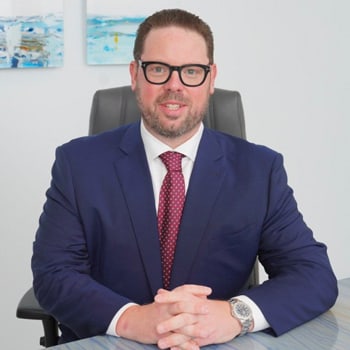 Michael K. Grife is a pre-eminent trial attorney, specializing in the areas of Personal Injury and Medical Malpractice. Mr. Grife has dedicated his entire career to exclusively representing the severely injured and loved ones of those who have been killed due to the recklessness of others. He routinely takes on insurance companies and corporate conglomerates, using his knowledge and assets to reverse the playing field in his clients’ favor. Throughout his career, Mr. Grife has served as lead counsel on numerous Multi-Million Dollar and Million Dollar recoveries for his clients.

Mr. Grife founded The Grife Law Firm in 2014 with one goal in mind: to provide top-level legal representation to the injured. To that end, The Grife Law Firm measures its success by the results it achieves for its clients, constantly striving to achieve the highest verdicts and settlement amounts possible. During his career, Mr. Grife has achieved numerous Multi-Million and Million Dollar recoveries for his clients, including, but not limited to:

$10 Million for a catastrophically injured victim of Medical Malpractice

$3.5 Million for a misdiagnosis in a Medical Malpractice case

$2.975 Million for a gentleman injured in a Motorcycle Crash

$2 Million for a misdiagnosis in a Medical Malpractice case

$1.75 Million for a woman in a Medical Malpractice Misdiagnosis case

As a result of his tireless dedication to representing the injured, Mr. Grife has garnered recognition and acclaim from legal ratings and his peers. Some of his accolades include:

Additionally, Mr. Grife is widely recognized as a leader in his field as a lecturer and member of various legal organizations in the areas of Personal Injury and Medical Malpractice:

Mr. Grife has lectured on personal injury for The Florida Bar:

Mr. Grife believes that the legal profession should be respected, and that is why he elects not to advertise on television or billboards. His boutique law firm in Boca Raton offers all of the assets and skill of a large firm, with the individualized service for our clients that is rarely seen. He further believes that clients should be serviced in a luxurious first-class environment where you will experience The Grife Law Firm difference from the moment you walk in the door.

Giving back to the South Florida community that he loves is a top priority for Mr. Grife. A Florida resident since 2002, Mr. Grife passionately supports animal rescue groups and ocean preservation charities.It his caring and compassion for others that motivates him to serve his valued clients and drives his success.