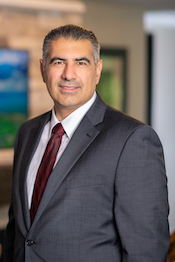 Since becoming an attorney in 2000, P. Christopher Ardalan has earned a reputation as a “lawyer for the people.” As founder of Ardalan & Associates, PLC, his diverse Southern California-based practice focuses on personal injury cases. Overseeing an impressive team of professionals, Ardalan instills his philosophy of doing his best on behalf of each and every client in all who work with him as well as those seeking his counsel.

In 1996, Ardalan was accepted into Loyola Law School. During his freshman year, he was appointed Vice-Justice of the Phi Alpha Delta Law Fraternity and Executive Lt. Governor for the Ninth Circuit of the American Bar Association, Law Student Division. He went on to become Governor of the Circuit, winning the Silver Key Award as well as “Circuit of the Year” honoring his events that promoted diversity, public interest and the betterment of the legal profession. He served as one of six hand-selected advocates on Loyola’s highly distinguished Byrne Trial Advocacy Team, where he went on to win numerous regional and national mock trial championships. Ardalan was also a writer for Loyola’s International and Comparative Law Review. The culmination of these achievements came when he graduated Cum Laude and Order of the Coif at Loyola and was selected as the featured graduation speaker at his commencement.

Ardalan has been committed to becoming one of the best in his profession since law school. By age 40, Ardalan had successfully taken on countless insurance companies and large corporations attempting to deny his clients justice and obtained millions of dollars in recoveries for injured victims. In the last decade alone, Ardalan was recognized as a top trial lawyer by the Consumer Attorneys Association of Los Angeles (nominated for Trial Lawyer of the Year); received the Litigator Award® as a Top 1% of all lawyers; was inducted into the American Board of Trial Advocates (ABOTA); was inducted into the Million and MultiMillion Dollar Advocates Forums; was named both Top 40 Under 40 and Top 100 Trial Lawyers by The National Trial Lawyers; was featured in Newsweek as Top Attorneys Nationwide; received the Byrne Alumnus of the Year Award as a trial lawyer from Loyola Law School; and featured on KCAL 9’s Best of Southern California.

Despite his tremendous success, Ardalan still considers himself a student of the art. “I never stop challenging myself to grow as a trial lawyer. I study the masters, my opponents, and my trials. Every trial is fertile ground for learning for the next. You have to keep advancing intellectually, emotionally, and morally to stay competitive. My passion for this stems from my deep desire to bring justice to my clients and I work each day to further that goal,” says Ardalan.

“Ever since I started working in law firms when I was 17, there has been nothing more I wanted to do than fight for the rights of those who have been wronged. Every decision I made since then has been guided by that passion. I have dedicated the greater part of my life to becoming a seasoned trial lawyer and compassionate warrior for my clients. Now having lived an entire career in the practice of law, and even beyond the countless verdicts and settlements I have achieved, undeniably the most fulfilling part of my job continues to be the positive changes I make in my clients’ lives each day by holding those who harmed them accountable. I am honored to have had the opportunity to serve my community and my clients, and I am indebted to all who have entrusted me to be their voice for justice.”