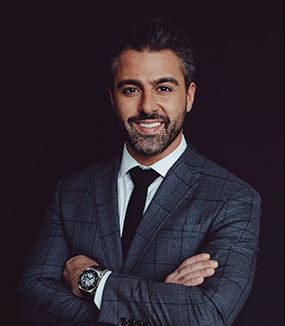 Robert S. Fakhouri is the founder and leading lawyer of The Fakhouri Firm, LLC. His accomplishments began as an undergraduate student at Loyola University where he graduated with a Bachelor of Arts and Science, Biology, and Anthropology. Robert was highly involved as an Alpha Sigma Nu Inductee, a member of the National Society of Collegiate Scholars, and a member of the Golden Key International Honour Society.

Additional accomplishments include being a part of the Dean’s List and Magna Cum Laude. Robert also studied at the University of Provence Aix-Marseille for French Language and Literature, despite fluency in the English, Arabic and Spanish languages. In law school, Robert exemplified his passion and interest in being a trial advocate. Before recovering millions of dollars for injured persons and their families in claims, Robert participated as a Chicago-Kent Trial Advocacy Team competitor, where he was awarded for his advocacy skills on a national scale. He also spent a year as a Judicial Extern to the Honorable Ronald Bartkowicz in the Circuit Court of Cook County. The following year, he was a Rule 711 Law Clerk at the Cook County State’s Attorney’s Office for the Felony Trial Division.

Robert began his legal career upon graduating Chicago-Kent College of Law. At that time, he was one of the youngest individuals to be admitted to the Illinois Bar. Robert joined the Goldberg Weisman Cairo law firm after graduating from law school and worked as a law clerk before becoming a Litigation Associate. His accomplishments and experiences enabled him to build and own a law firm at the young age of 25.

The Fakhouri Firm is a civil litigation law firm dedicated to protecting the legal rights of those wronged by the conduct of others while also being committed to clients in the formation and ongoing practice of their businesses and corporations. Having effective attorney representation has always been vital to the law firm. Robert recognizes the significance of his community and fights to advocate others inside and outside of the court of law. His volunteer and community service experience involves being a founding board member of the Hippocratic Cancer Research Foundation and a Director on the board of the Greek American Rehabilitation Center in Wheeling, Illinois.

Robert was also a part of the Advisory Council Chair for the Chicago Youth Leadership Academy along with participating as a board member for Northwestern Hospital and Greek American Rehabilitation Center. In his legal academic community, Robert was a Student Bar Association Student Mentor at Chicago-Kent College of Law. After graduation, he returned to the law school as a trial team coach. Robert is now licensed to practice law in Illinois, and is an active member of the American Bar Association, the Illinois Bar Association, and the Chicago Bar Association.

Today, Robert Fakhouri is recognized as a Top Attorney of North America from 2016 to the present, and recently a recipient of the 2019 Illinois Super Lawyer Rising Star honor, an honor awarded to only 2.5% of attorneys in the State of Illinois.