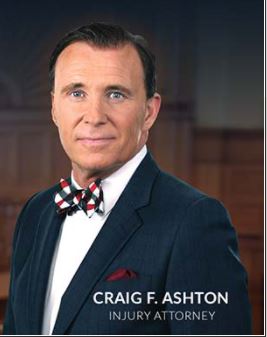 Mr. Ashton has been practicing personal injury law in the Sacramento area for over 20 years, and has been a partner with the law firm of Ashton & Price for over 18.

Mr. Ashton earned a Bachelors of Arts degree in history from U. C. Berkeley.

Mr. Ashton graduated from Pepperdine University School of Law. While there Mr. Ashton was President of Environmental Law Society and was also elected President of the Student Bar Association. He received an award from then United States Attorney General Richard Thornburgh at the Beverley Hilton Hotel for Best Oral Advocate in Pepperdine’s annual moot court competition.

Currently, Mr. Ashton is a member of the American Bar Association and the Consumer Attorneys of California and has been a legal analyst for Channel 31 Good Day Sacramento since early 2007.

Prior to founding Ashton and Price with his law partner, Mr. Ashton was an associate attorney for the Law Offices of Arnold Laub, in San Francisco, California. Mr. Ashton also clerked for Honorable Chief Judge Parlen McKenna, at the Department of the Interior in Washington D.C., with an emphasis on environmental law. Mr. Ashton has facilitated over $200 million in personal injury settlements, awards, and judgments over the course of his career.

Hon. Chief Judge Parlen McKenna, at the Department of the Interior in Washington D.C., Law Clerk