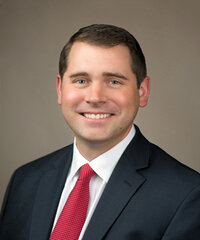 Justin focuses his practice on personal injury litigation, as well as mass tort litigation, where he specializes in helping individuals across the country who are harmed by recalled or unsafe pharmaceutical drugs and medical devices.

Prior to joining Roberts & Roberts, Justin practiced at Parsley Coffin Renner LLP in Austin, Texas, where he represented electric and natural gas utilities in complex regulatory proceedings before the Public Utility Commission of Texas and the Railroad Commission of Texas.

Justin also has experience in all three branches of Texas’s state government. Early in his career, Justin served as a briefing attorney for the Honorable Paul W. Green of the Texas Supreme Court. He subsequently served as General Counsel of the Texas House Republican Caucus during the 83rd Legislative Session, after which he enjoyed a stint as the General Counsel of the House Select Committee on Federalism & Fiscal Responsibility.

Justin also worked as an attorney in the Elections Division of the Office of the Texas Secretary of State, where he advised state, county, and municipal officials on election-related issues, as well as served as the lead attorney in advising state political parties on the primary process.

Justin completed his undergraduate studies at Vanderbilt University, receiving a Bachelor of Arts (B.A.) in Public Policy Studies with an emphasis in Middle East Policy. He went on to receive his Doctorate of Jurisprudence (J.D.) from St. Mary’s University School of Law, where he served as the Editor in Chief of the St. Mary’s Law Journal, which is one of the most frequently cited law journals by state and federal courts.

During his tenure as Editor in Chief, Justin also worked with his colleagues to establish a new legal periodical, the St. Mary’s Journal on Legal Malpractice & Ethics, to provide strong legal scholarship on the issues of legal malpractice, ethics, and professional responsibility.

Justin was born and raised in Tyler, Texas, and graduated from All Saints Episcopal School. He and his wife are the proud parents of three young daughters named Pippa, Pacey, and Posie. Prior to joining Roberts & Roberts, Justin and his family lived in Austin, Texas, for seven years.