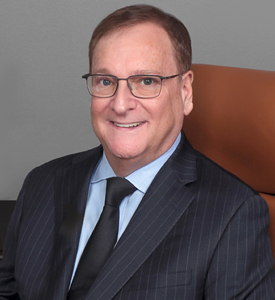 Principal of this 6 attorney law firm that concentrates its practice in all aspects of Civil Trial Practice and Appeals in all State and Federal Courts in the Northeastern Illinois geographical area with a focus on catastrophic bodily injury and death claims concentrating in the representation of clients in their nursing home neglect, motor vehicle negligence and premises liability claims. The firm also represents clients in their Workers Compensation Act claims and their commercial and residential real estate transactions and associated litigation.

95% of Practice Devoted to Litigation

Speaker at the April 15, 2011 Seminar Don't Lien on Me: A Comprehensive Overview of Liens speaking on Successfully resolving Medicare Liens against Tort claims

Speaker at the November 5, 2010 Seminar Trial Practice from Voir-Dire Through Post Trial sponsored by the Illinois State Bar Association lecturing on Closing Arguments

Speaker at the May 10, 2004 Seminar The Anatomy of an Automobile Case- sponsored by the Illinois State Bar Association lecturing on issues involving the Bankruptcy of a Party, The Death of a Party and Non-English Speaking Parties

Speaker at the April 5, 2001 Insurance Coverage: An Update Seminar lecturing on The Emerging Tort of Bad Faith

Speaker at the May 18, 2000 Seminar An Update for Tort and Insurance Litigators lecturing on Uninsured and Underinsured Motorist Arbitrations

Guest panelist on the ISBA Cable Television Program that dealt with the topic area of automobile accident claims. This was filmed on August 21, 1997.

Speaker at the May 3, 2019 Illinois State Bar Association Allerton House Conference. The topic was Discovery of Social Media Evidence: Do we need a uniform rule? If so what should its parameters be?

Selected by peers as a Super Lawyer (2009-present)

Selected to The American Society of Legal Advocates

The Decalogue Society of Lawyers

U.S. District Court for the Southern District of Illinois, 2018

U.S. District Court for the Central District of Illinois, 2019

Elected Member of the National Board of Directors of the Alpha Epsilon Pi Foundation, 2019-present.