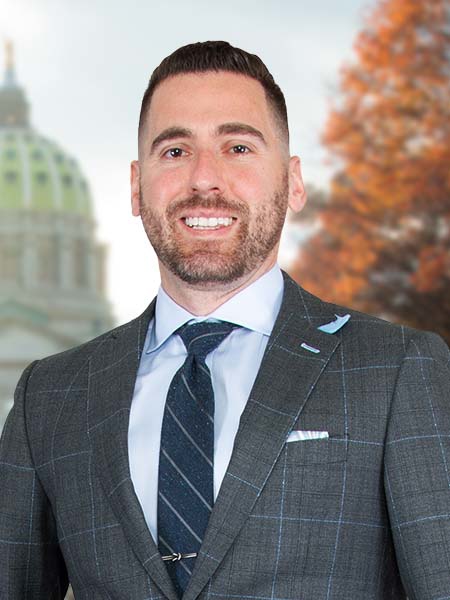 I believe in helping people who have been wrongfully injured and feel like they don’t have a voice anymore. I will stand on your side. I will take down the bad guys. I will be your voice until yours comes back.

As a dedicated and passionate advocate for the injured, Matt is not afraid to take on big insurance companies or employers. He understands that his clients are going through a very challenging time and have suffered serious injuries due to no fault of their own, whether caused by a drunk driver, negligent traffic light design, or a distracted truck operator. Matt focuses his practice on car accidents, motorcycle accidents, truck accidents, pedestrian accidents, and cases involving wrongful death. He is especially passionate about helping individuals fight for fair treatment from insurance companies.

Matt earned his B.A. from Pennsylvania State University, soon enrolling in Georgetown University Law Center. After graduating with his J.D., he began working as a law clerk for Pennsylvania Supreme Court Chief Justice Thomas Saylor. While serving as law clerk to the highest court in the state, Matt improved his writing skills and honed his persuasive advocacy. He gained firsthand knowledge on how cases are won—from behind the bench. After this role, he joined Klehr Harrison, a prominent Philadelphia law firm, as a litigator.

Matt has earned inclusion in the Super Lawyers® Rising Stars list for four consecutive years, which is a recognition reserved for the top 2.5 percent of attorneys in the state under the age of 40. Susquehanna Style Magazine has also recognized him as a Select Lawyer in Personal Injury & Auto Accidents Law in response to peer votes and he holds a 10.0 Superb Avvo rating. He has also been made a member of The National Trial Lawyers: Top 25 Motor Vehicle Trial Lawyers Association.

Additionally, Matt is a member of the Pound Civil Justice Institute. As a Central Pennsylvania native, Matt is a faithful Penn State fan. He also loves motorcycling. When not in the office, Matt can be found spending time with his wife and two children in the State College and Harrisburg areas.