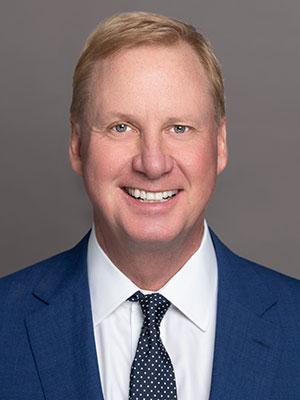 Timothy Tomasik is a founding member of Tomasik Kotin Kasserman, LLC. In his 28 years of practice, Tim has distinguished himself as one of Chicago’s elite trial attorneys. Prior to joining the firm, Tim practiced for 15 years at the prestigious Clifford Law Offices in Chicago and, before that, as a member of the Cook County State's Attorney's Office Bureau of Special Prosecutions. He has tried over 100 jury and bench trials to verdict. Tim has handled and successfully resolved hundreds of millions of dollars in claims in a variety of practice areas, including complex premises liability, aviation litigation, medical negligence, medical liability, hospital liability, and mass disasters. In 2021, Tim was named one of the Top 10 Trucking Trial Lawyers in Illinois by The National Trial Lawyers. He has obtained millions of dollars in verdicts and settlements representing victims of trucking accidents.

As a trial attorney, Tim has handled some of this generation’s most high profile and complex cases. For instance, after 180 depositions and navigating millions of pages of documents over several years, Tim, acting as one of the lead counsel of the Plaintiffs’ Executive Committee, secured a $1.2 billion settlement in the World Trade Center litigation against the airlines for security breaches that led to the tragic 9/11 hijackings and air crashes. After a scaffolding collapse at the John Hancock center in March 2002 that resulted in the heartbreaking death or serious injury of ten bystanders, Tim acted as co-counsel and received a $75 million global settlement for the victims. Tim also obtained a sizable settlement as one of the lead lawyers for NBC Sports Chairman Dick Ebersol, who tragically lost his 14-year-old son when a chartered plane crashed moments after takeoff due to the pilot’s failure to de-ice the plane’s wings. Tim also successfully handled a wrongful death case for the surviving family members of a Cirrus SR 22 aircraft crash that settled for $2.5 million. Tim successfully demonstrated how the instructor failed to responsibly maintain proper air speed and prevent wing stall on approach for landing, which caused the plane to crash short of the runway. Pursuant to FAA Standards, the instructor was deemed the pilot in command, and failed to ensure the safe operation of the airplane at low altitude.

Most recently, Tim Tomasik, according to the 2015 National Law Journal's Big Money Wins ranking, obtained the largest verdict in Illinois and the 25th largest in the nation with a $25.9 million verdict on behalf of a client who was severely injured in a horrific Yellow Cab taxi crash 10 years ago. The incident involved the speeding cab hurling off an expressway ramp and smashing head-on into a concrete barrier. As co-counsel, Tim obtained a $13 million jury verdict for a medical doctor who was paralyzed as a result of negligently-administered epidural anesthesia before a routine knee surgery. The Illinois Supreme Court affirmed the verdict as well as several key trial practice and agency issues. After a dilapidated structure owned and operated by the Chicago Cubs collapsed on a 21-year-old man, resulting in his death, Tim recovered a $2.5 million settlement from the Cubs. In another wrongful death action, Tim obtained a $1.9 million settlement from a national retailer after its pharmacy negligently provided incorrect prescription drugs that killed the victim in a matter of days. Tim's work was critical in obtaining a $3.02 million settlementfor a 9-year-old victim of a sexual assault, Girl X. Tim also obtained a $2 million settlement for a Chicago Tuckpointer who suffered a mild traumatic brain injury after he was struck by cement falling from a building he was working on. Tim brought a medical malpractice action after a mother of two’s doctor failed to properly treat a lesion on the victim’s lung that led to Stage III B non-small cell lung cancer and death. The case settled for $5 million. In another matter, Tim obtained a $3 million settlement on behalf of a client who suffered multiple fractures while he was the unwitting passenger of a drunk driver in a horrific Ferrari crash.

Tim’s peers have also recognized his excellence in trial work. He was inducted as a fellow into the International Society of Barristers, an honor society of outstanding trial lawyers, and he currently serves on the Board of Governors of this organization. Tim’s accomplishments have followed him throughout his career. In 2000, the Law Bulletin Publishing Company of Chicago named him a Top 40 Under 40 award winner in its inaugural year, and he has been named a Leading Lawyer since 2008. Tim served for 15 years, including as a General Chair, for the Chicago Bar Association's Judicial Evaluation Committee. In 2009, Tim received the William J. White Award of Excellence for his exceptional efforts for that committee. In 2015, Tim was chosen to be one of 30 trial lawyers as a member of The Summit Council, an exclusive group of today’s top civil justice attorneys dedicated to the highest levels of courtroom advocacy, to obtaining justice for those who have been hurt by corporate wrongdoing, and to protecting of the civil justice system. All members are nationally recognized by their peers as top civil justice advocates. Tim has been recognized multiple times as a Super Lawyer, and in 2019, 2020, 2021, and 2022, Super Lawyers named him one of the top 100 lawyers in Illinois.

Tim began his career as an Assistant State’s Attorney in Cook County. As a member of the Bureau of Special Prosecutions, Tim handled numerous high profile criminal cases, including the trial of capital murder and sexual assault cases. In 1999, he was named the American Legion Expert Litigator for his outstanding service as a gang prosecutor in the Chicago community as well as for his excellence as a civil litigator.

Tim is frequently invited to speak before audiences ranging from anesthesiologists to business professionals to other lawyers. He has given presentations on aviation litigation and mass disasters before audiences in New York, Miami, London and Shanghai. Specifically, in February 2012, Tim lectured on the profound effects 9/11 has had on the aviation industry and aviation litigation to the International Air Transport Association Legal Symposium in Shanghai. Tim also presented on litigating cases in the United States at the 2012 Cross Border Personal Injury Seminar in London. As a recognized authority in the legal field, Tim also speaks regularly to members of the American Bar Association, Illinois Trial Lawyers’ Association, and Chicago Bar Association on a wide range of legal topics, including the benefits of mock juries, jury research, professionalism, Medicare, aviation, medical malpractice, and evidentiary issues. As a fellow of the Pound Civil Justice Institute, Tim also moderated a forum for state appellate court judges at the American Association of Justice Convention.

Widely published, Tim has authored numerous articles on varying legal topics, including the rules of evidence. For instance, Tim has published multiple articles on the proper measure of damages for property damage on the ground in the wake of his work on the 9/11 litigation. Tim’s work on jury research can also be found in the American Bar Association’s publication for the Tort Trial and Insurance Practice Section.

Holding a number of prestigious faculty appointments, Tim regularly donates his time to assist law students and other lawyers. Tim is an Instructor of Trial Advocacy at the Trial Advocacy Institute at the University of Virginia Law School. He has also taught trial advocacy for the National College of District Attorneys and National Advocacy Center, and is a former instructor for the Illinois Federal Bar Training Course.

Away from work, Tim was previously served as Board Chair of Lawyers Lend-A-Hand, a foundation which provides grants to mentor programs dedicated to serving Chicago’s underprivileged youth. He also served as a Board Member of the Western Springs Foundation for Educational Excellence, a non-profit, volunteer organization, raising funds to enhance the education of D101 students. He is a supporter of the Public Justice Foundation, which is devoted to advocating for the public interest and helping ordinary people combat injustice by providing them with access to the courts.